ROWAN works closely with Ugandan widows, caregivers & community members – most of whom lost their spouse to AIDS. The women are almost always supporting children & have no way to generate income. ROWAN ensures that all stakeholders in economic development projects have an equal voice in determining business ideas, financial goals & strategies for launching new business enterprises.

What is the Process Toward Self-Reliance? Passionate for Passion Fruit- since 2012 Growing & selling pineapples – since 2008 Making Paper Bead Jewlery – since 2006 Visit our Store on Etsy! Renting oxen to farmers who use them in agricultural work – since 2006

Since gaining independence in 1962, Uganda has endured upheaval & unrest. Some 300,000 Ugandans died at the hands of dictator Idi Amin & the country faced more than twenty years of war until the National Resistance Movement gained power in January 1986. Since becoming president that year, Yoweri Museveni is credited with improving the country’s human rights record. However, Uganda has not been able to establish & sustain a growing economy. During the last three to five years, Uganda began to revitalize its economy. The nation has managed a growth rate of 6.6% (2009 estimate). However, in 2009 approximately 32% of the population was living below the international poverty line of US$1.25 per day. With ongoing armed conflict involving rebels from the Lord’s Resistance Army, the government has been unable to focus primary attention on economic development. One result is the low level of business investment from overseas sources.

Agricultural production employs more than 80% of the work force & accounts for approximately 22% of Uganda’s economy. Coffee beans make up the bulk of the country’s exports. Relying so heavily on a single cash crop makes the Ugandan economy especially vulnerable to shifts in weather patterns. A recent series of floods significantly damaged the coffee crop & reduced the income of agricultural workers.

Increasing the rate of economic growth & reducing the national debt. Creating more jobs in service industries, which employs only 13% of the labor force but generates 52.8% of the economic output. Increasing individual wealth, especially in rural areas & among families stricken by HIV/AIDS.

The Harvest is Plenty

Have you ever been so proud of something that you couldn’t WAIT to show it to off? Well, as Sherlee and I arrived on the scene of Mawanga, Uganda on August 19, Pastor Paul hurried us to the garden where ROWAN widows were picking their first harvest of pineapples. And

Over the last four months, Pastor Paul Nyende has been negotiating with a local farmer to buy his four-acre plot of land. It us located right next to our ROWAN office. The land holds one large house, one small house and 188 healthy coffee trees.
After much prayer and 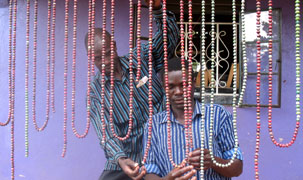 The ROWAN office in Mawanga has become a bead-making machine after local artisan trainer empowered our women and children to make beads out of local paper and varnish them to create necklaces, bracelets and earrings for supporters outside of Africa. The recent shipment

Excerpt from Joy, our current ROWAN intern:
One of the current micro enterprise projects ROWAN initiated is Passion Fruit! I had the honor to take part in