Anyone who cooks knows that it’s great fun to attempt recipes from other parts of the world. Now that once-localized ingredients are widely available, why not try something new in the kitchen? We’ve already shared our recipes for the popular matooke & seasonal nsenene, today lets make some bread, Ugandan style!

One of the foods Ugandan students report missing most while away from home at school is their mother’s millet bread. Which isn’t a surprise as millet grains have been consumed by humans for millennia. In fact, they may have had a role in the initial establishment of settled agrarian societies. Today, millet is a heavily cultivated crop in the plains of sub-saharan Africa, favored for it’s sort growing season & ability to thrive under hot, dry conditions. Millet bread is a bit of a misnomer (in Uganda anyway) as the bread is traditionally made with cassava flour (usually mixed with millet flour) but sorghum flour can be used if millet flour isn’t available. That’s it, no hot oven & no worry about rising agents. While millet or sorghum flours can also be baked with, they work best in a flour mix to keep resulting breads from becoming starchy & coarse.

Be sure to check out our recipes for matooke & nsenene, plus stay tuned as we plan to share more Ugandan recipes! 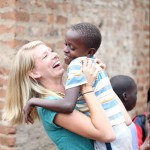